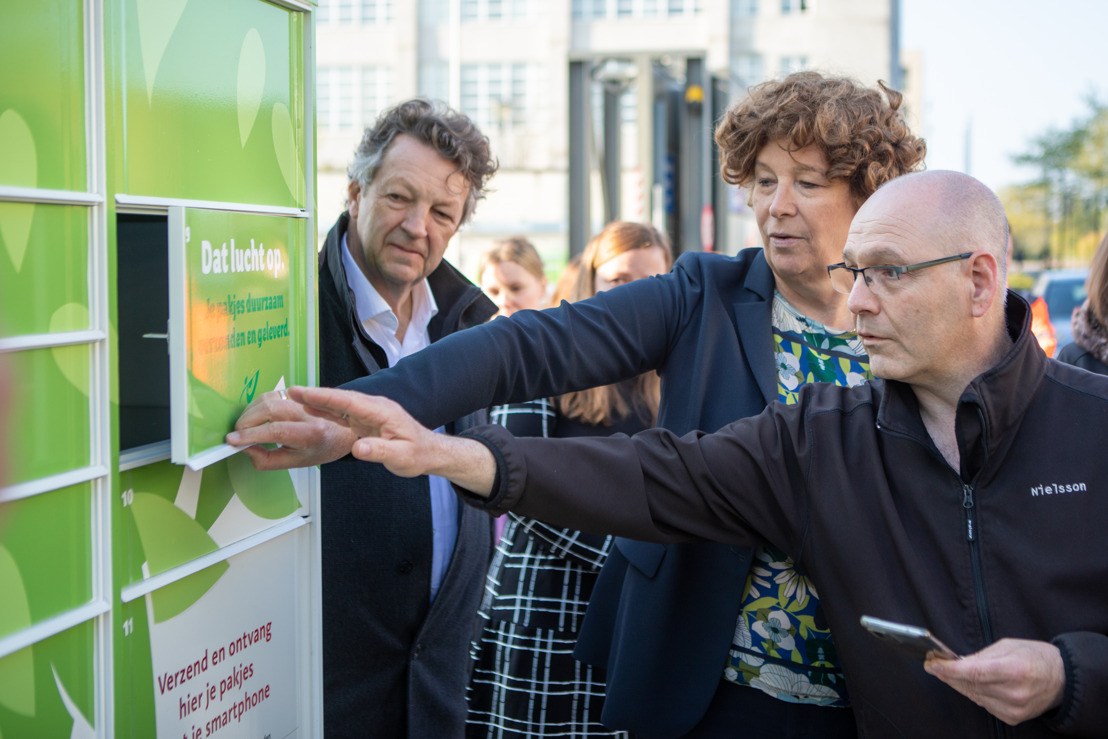 bpost and City of Leuven share the same ambitions to slash carbon emissions and boost sustainable transport. The two parties have driven the Ecozone project over recent months, leading to an efficient and successful rollout.

Thanks to bpost’s successful pilot in Mechelen in 2020, the Ecozone blueprint could be rapidly rolled out in the centre of Leuven. A green fleet of bike trailers and electric vans has been deployed for the full zero-emission delivery to homes, as well as traffic to and from post offices and pick-up points. The existing pick-up point network of post offices, post points and parcels points has been beefed up with additional parcel locker capacity to create a finely meshed network within walking distance of every inhabitant of Leuven.

The combination of green vehicles, mail carriers with bike trailer and a large number of pick-up points means that bpost is able to limit the number of vehicles and kilometres per vehicle in the city.

The Ecozone rollout was soon picked up by inhabitants and retailers in the city, who have quickly adapted their behaviour. A significant rise (+11%) in the number of people who have updated their preferences in the My bpost-app to have their parcels delivered straight to a pick-up point has already been noted. No fewer than one in four have chosen a pick-up point other than their home address, with parcel lockers immediately proving popular. In fact, Leuven can boast a number of parcel locker locations among the top 20 best used locations in Belgium. This has already led to a reduction in the number of mail carrier rounds and the distance covered.

It also enables retailers in Leuven to boost their business. The network offers them the option of placing a sale in a parcel locker where customers who are unable to make it to their store before closing time can pick it up without the involvement of bpost.

The Ecozone also improves quality of life and air quality in the city. Professor Koen Mommens of VUB has extrapolated the impact of this shift to emission-free transport in the Leuven 3000 postcode zone to the whole of the City of Leuven. There is a 85% (1.9 tonne) reduction in daily carbon emissions compared with the pre-Ecozone situation.  The VUB assesses the total sustainability gain in terms of society and environment (indirect social and ecological costs) at 69%, mainly due to lower costs of traffic congestion, noise pollution, carbon emissions and air pollution.

Leuven Aldermen Dessers (Mobility) and Geleyns (Trade) both welcome the benefits for their city with open arms: “We are taking a step forward in terms of sustainable deliveries in the city. This Ecozone gives inhabitants and retailers more options and it is hugely convenient. It helps us building the Leuven of tomorrow: sustainable and enterprising.”

Says Minister De Sutter: “The people of Leuven shop online and those parcels are increasingly delivered in an environmentally friendly way. Step by step, e-commerce is becoming greener. People’s lives and health in the city are better with fewer vans on the road. The popularity of the Ecozone among local stores shows that Leuven is one of the leading cities when it comes to green ambitions. The green transformation of e-commerce is a win-win and both the retailers and inhabitants of Leuven and bpost are showing they are all on the same side.”

Ecozones become the benchmark for green city logistics in Belgium

bpost group has the ambition to be the world’s most sustainable e-commerce logistics provider and it takes a leading role in this domain. It is driving change in city logistics with such partnerships between bpost and city administrations, with the cooperation of citizens. Ecozones are proof that customer satisfaction, service and innovation go together. This year will see further sustainable delivery projects in city centres in the three regions of Belgium.

Says Jean Muls, CEO bpost Belgium: “Sustainable enterprise, and specifically sustainable city logistics, is an integral part of the long-term vision and strategy of bpost group. We aim to be a role model in that field, working closely with various stakeholders. With the good results of the Leuven Ecozone and the planned replication of the concept in other city centres later this year, bpost shows that it is able to fulfil the role of trailblazer in sustainable city logistics in Belgium.”

The Leuven Ecozone: facts and figures

1 According to bpost online market research among 403 users, over the period March - April 2022